It's been about a year since I started Pokﾃｩ Trainer Nic, and since having started, its expanded from a YouTube channel to a website, store, blog, and a network of social media accounts.

The brand didn't spawn out of nothing though. It actually started as a social media experiment to see how quickly I could scale something new in the modern age of content creators. This blog post is less about Pokﾃｩmon and more about where I managed to take the brand in a year.

A Little About Pokﾃｩ Trainer Nic and Being a Content Creator

I, Nic Raboy aka Pokﾃｩ Trainer Nic, have a background in web, mobile, and game development. I operate my own network of developer education channels called The Polyglot Developer which includes a blog, YouTube channel, and collection of social media channels just like Pokﾃｩ Trainer Nic. I also work in Developer Relations which focuses on a lot of the same content generation methods.

What I'm trying to say is that Pokﾃｩ Trainer Nic is not my first adventure into content creation.

The difference is that back when I created The Polyglot Developer there was a lot less competition with content creators as there is now in the 2021-2022 time span.

Alright, fast forward to 2021, put out the following post on LinkedIn: 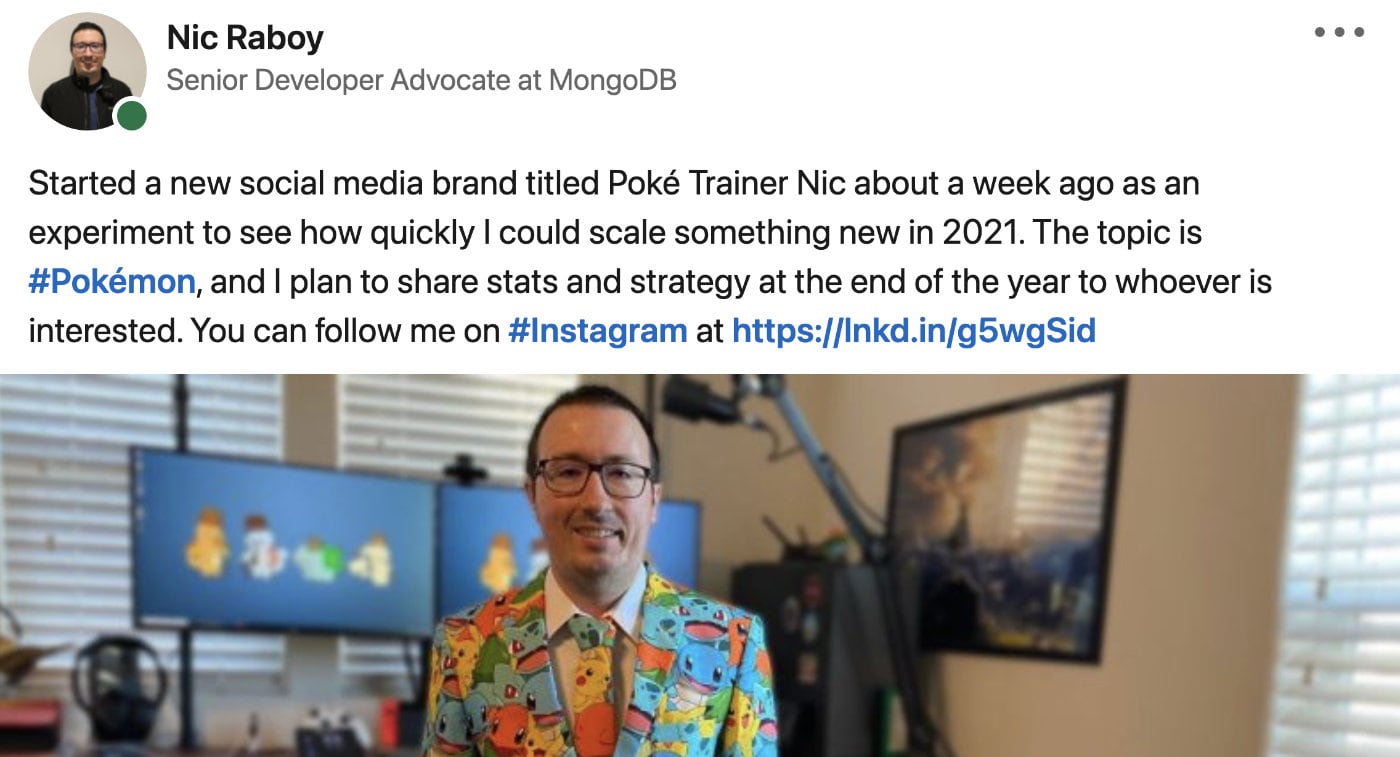 To follow up on the promise, we're going to explore each of the pieces behind Pokﾃｩ Trainer Nic and the one year metrics that came out of them.

The YouTube channel is the core of the Pokﾃｩ Trainer Nic content network. To date there have been 131 videos published to the channel.

When I started publishing YouTube videos, the core focus was trading cards and merchandise reviews, but it later expanded into video games and live-streaming content.

Here are some metrics taken from YouTube to show you how the channel has grown over the past year.

The above image represents the lifetime stats for the YouTube channel which is about a year. Notice the date range in case I end up going viral in the few weeks leading up to this article publishing.

Let's break down the metrics in the image.

In the first year the YouTube channel gained 112 subscribers, had 12,500 views, and entertained viewers for 305.3 hours.

These numbers are great, but it isn't the best part or the thing that should be focused on. Instead, look at the graph. The graph is showing that month after month, the channel is seeing a consistent increase that isn't just viral spikes. Next year I'll be checking to make sure the incline is still happening.

Am I happy with this? You bet!

If you're interested to know some of the hardware and software that I was using in 2021 for recording, streaming, and editing content, check out the behind the scenes video that I published.

The above video should give you some ideas if you wanted to publish your own YouTube content, but aren't quite sure where to start.

From a personal education perspective, creating Pokﾃｩmon related content has helped me to learn about different recording and editing techniques that are very different from the typical content that I produce for The Polyglot Developer. With this in mind, the quality of my more recent videos are significantly better than my earlier videos.

As new video and blog content are produced, they are promoted on each of the social media channels.

I'd like to be able to tell you that I know what I'm doing in terms of social media, but I don't. Instagram and Facebook don't make it easy for pulling stats and the Twitter account is used for other things than just Pokﾃｩ Trainer Nic. For this reason, I can't share any direct stats to my social media efforts.

When I post on social media, I often get "Likes" and similar, but my overall engagement is quite low. Most of the accounts responding to my posts are bot accounts and not real humans.

Coming up with better social media reporting is a goal of mine for the next year.

Written Articles, Tutorials, and News on the Blog

The Pokﾃｩ Trainer Nic brand started with YouTube and is primarily focused on YouTube, but the blog plays a strong role as well, even if it didn't start to until the end of the first year.

The blog has various tutorials such as how to submit Pokﾃｩmon cards for grading, fixing server related errors for Halo Infinite, and more. The blog was meant to be a slightly different format than the YouTube channel.

With that in mind, let's look at the stats!

The above image is showing metrics from the Google Search Console.

Now let's look at the Google Analytics behind the site:

Just like with YouTube, the total clicks, impressions, and page views aren't the best part. The best part is the graph! Look at how we have an incline as time progresses. We're not seeing one off spikes, but a constant increase in popularity!

I am a firm believer that content is king. This means as more content is produced, the more impressions, clicks and more will come with it. As time progresses, the blog stats should continue to grow.

Sales of Product on the Website, eBay, and Similar

I'll keep this short and sweet.

I have products listed for sale on the website, but haven't sold a single thing. It could be because people think my prices are unreasonable or because the website isn't popular enough yet. Either way, I'm not upset about it.

In terms of eBay and similar, while I occasionally list product, I haven't made any sales there either. I don't have much of a seller rating on the platform (more non-existent) and the market is currently flooded with product.

If I had to guess, I'll have more success with selling product in future years when I'm more established online.

An Estimate of the Total Spend on Pokﾃｩmon Product, Tools, and Services

When it comes to what I've spent on Pokﾃｩmon product in the past year, I haven't done a great job keeping track. Between Maria and I, we've had a lot of random product making its way into our home.

Because we haven't been keeping track, I can only guess that we've spent around $3,500 on Pokﾃｩmon product between 2021 and 2022, the first year that we've been doing this.

Probably the most expensive purchase of the year has been in the collection of Bear Walker skateboards.

It might be hard to believe, but everything listed above is free to use. I believe the only service I'm paying for is for the website domain name which is only $12.00 per year.

I already had cameras, microphones, computers, and similar so I didn't need to purchase anything to make these content channels happen.

Taking the total estimated spend from products and services into consideration, it was quite a lot. Remember, I didn't sell anything and made no money from sponsors or advertising. Everything was out of pocket with no return.

Did I spend more than I could afford? No! Did I know that I probably wasn't going to profit from this? Yes!

Maria and I knew we were going to spend money. We did it as a family and we had a great time.

You just got a little insight into my life as a content creator. This article was meant to be less about Pokﾃｩmon and more about what goes into content creation, what kind of results to expect, and what you need to get started. Anyone can become a content creator, it just takes time before you see results.

The best part of starting Pokﾃｩ Trainer Nic was being able to enjoy the Pokﾃｩmon hobby as a family.

Got a question about anything I reported, drop me a message on Twitter! I'd also be open to feedback on anything that I've done in the past year as well.

A video version of this article can be found below.