I recently beat the main story of Pokémon Legends Arceus and have been going back to collect all of the alpha Pokémon in the game. They are giant, quite powerful, and bragging rights when I game with Maria and my friends. However, they can be difficult to catch without a proper strategy.

Take Alakazam for example. It is an incredibly strong psychic type Pokémon with incredibly low defensive abilities. Because of these stats, it's easy to defeat with too strong of Pokémon and too easy to be defeated with weaker Pokémon. This means you have to think a little differently.

In this short tutorial, we're going to see how to catch an alpha Pokémon, in particular an Alakazam, using nothing more than some food an a sneak attack.

Before getting too ahead of ourselves here, I want to break down some numbers so that you'll know if you're ready or not to make the attempt.

The alpha Alakazam in Pokémon Legends Arceus can be found pretty much immediately in the game because you don't need to climb, surf, or jump over anything to encounter it. However, it is a level sixty (60) Pokémon. 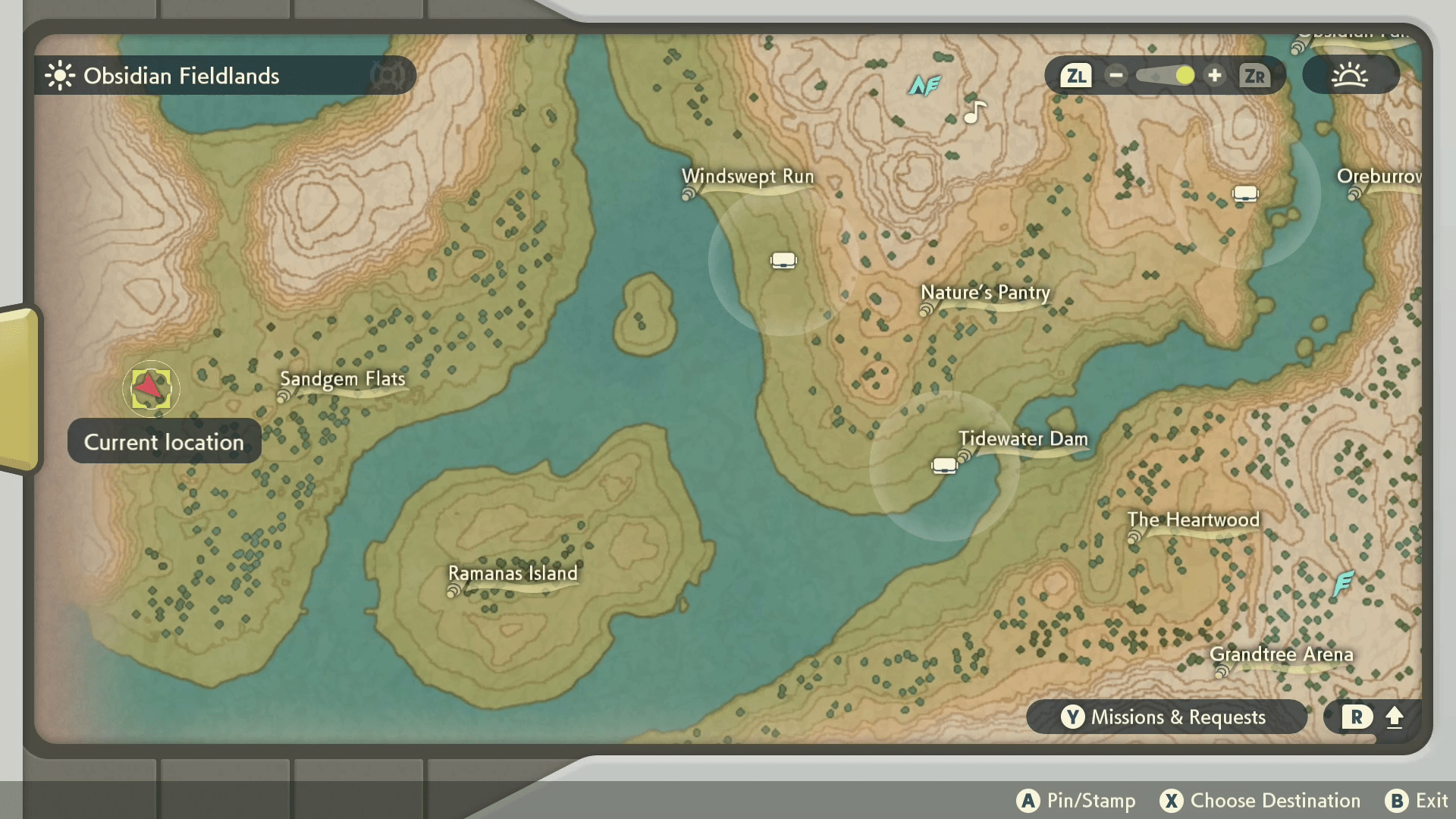 The Alakazam is in the Sandgem Flats which is Southeast of Obsidian Fieldlands.

Rather than rushing over there, pressing your luck, and failing about twenty (20) times like I did, you need to go into this with a proper strategy.

What Does Alakazam Eat?

The best thing you can do is look at your Pokédex to find out information about the Pokémon in question. This will, however, mean you need to encounter the Pokémon first. If you'd rather not bump into Alakazam prior to catching it, take a look at my Pokédex entry. 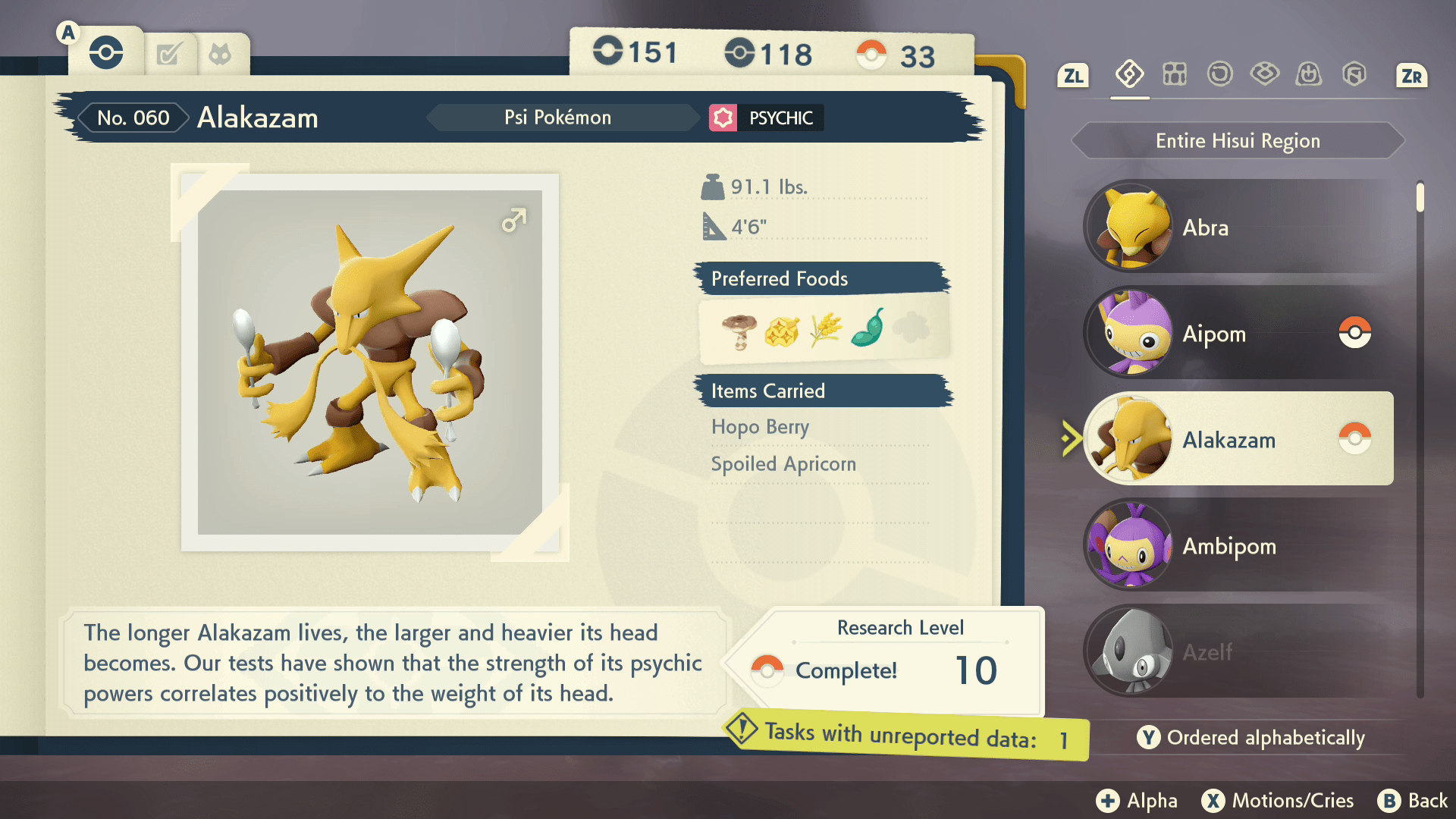 See the preferred foods? You can throw a few of those foods at Alakazam, alpha or not, and it will make the Pokémon easier to catch.

So where can we find those food items?

The easiest place to find the Dazzling Honey, one of the food items on the list is where the Combee live near the Grandtree Arena. That's my go-to location when I need that particular item, however, all items including the Dazzling Honey, can be found elsewhere.

Let's knock out two (or three) birds with one stone here.

Travel to the Cobalt Coastlands, assuming you've adventured this far in the game. 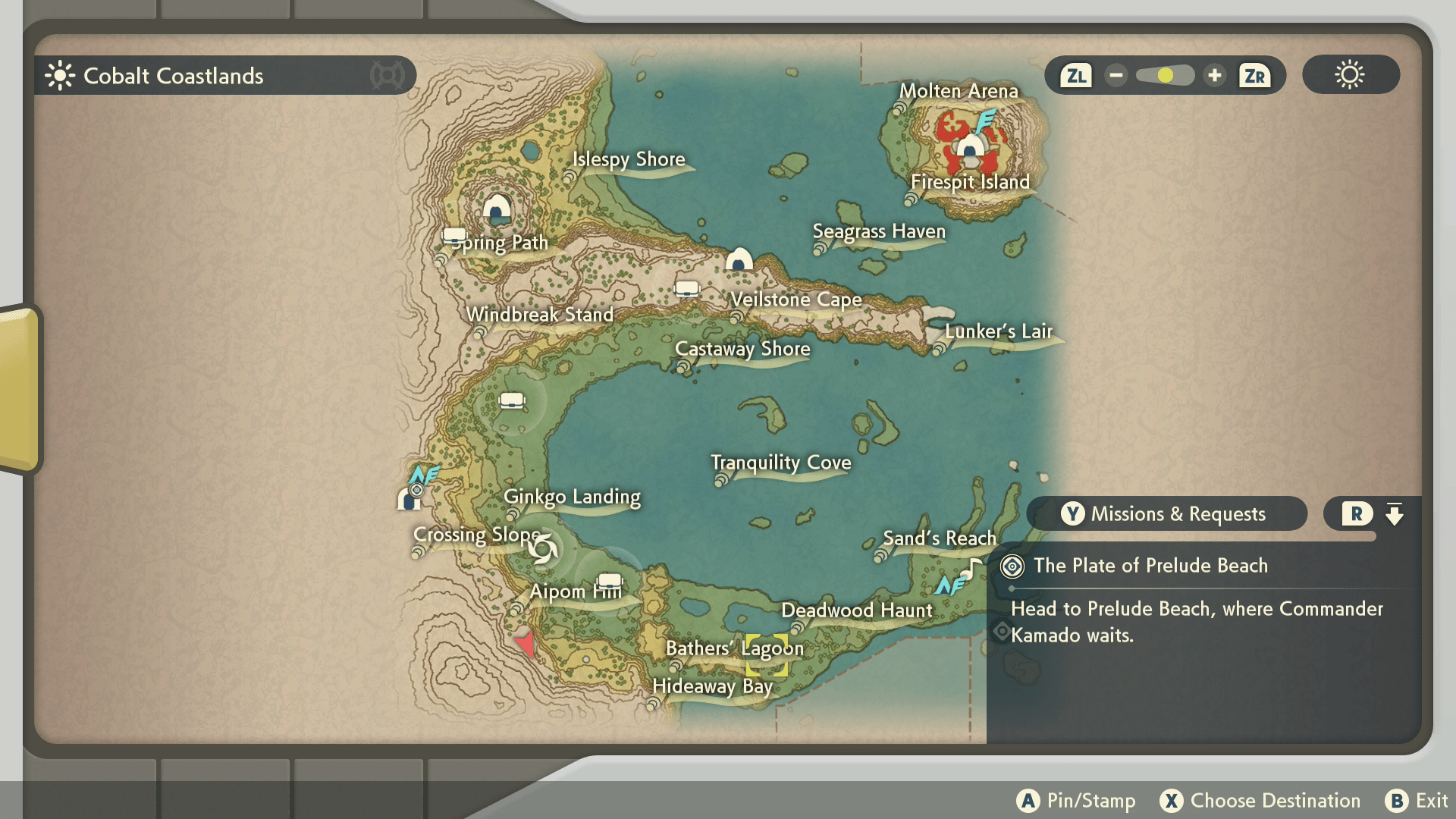 There are a few things to look for in this location:

If you're lucky, the pile of leaves will give us everything we need. The items are random, but you can often find Dazzling Honey, Springy Mushroom, and even Razz Berries. These are items that work well on the Alakazam.

The Razz Berries are not on the list of preferred food, but they work generically on all Pokémon in the game.

If you're looking for specifically the Razz Berry, those can be found in the blue trees with yellow berries. They are as common as the Apricorn in other areas, so don't worry too much about them being rare. 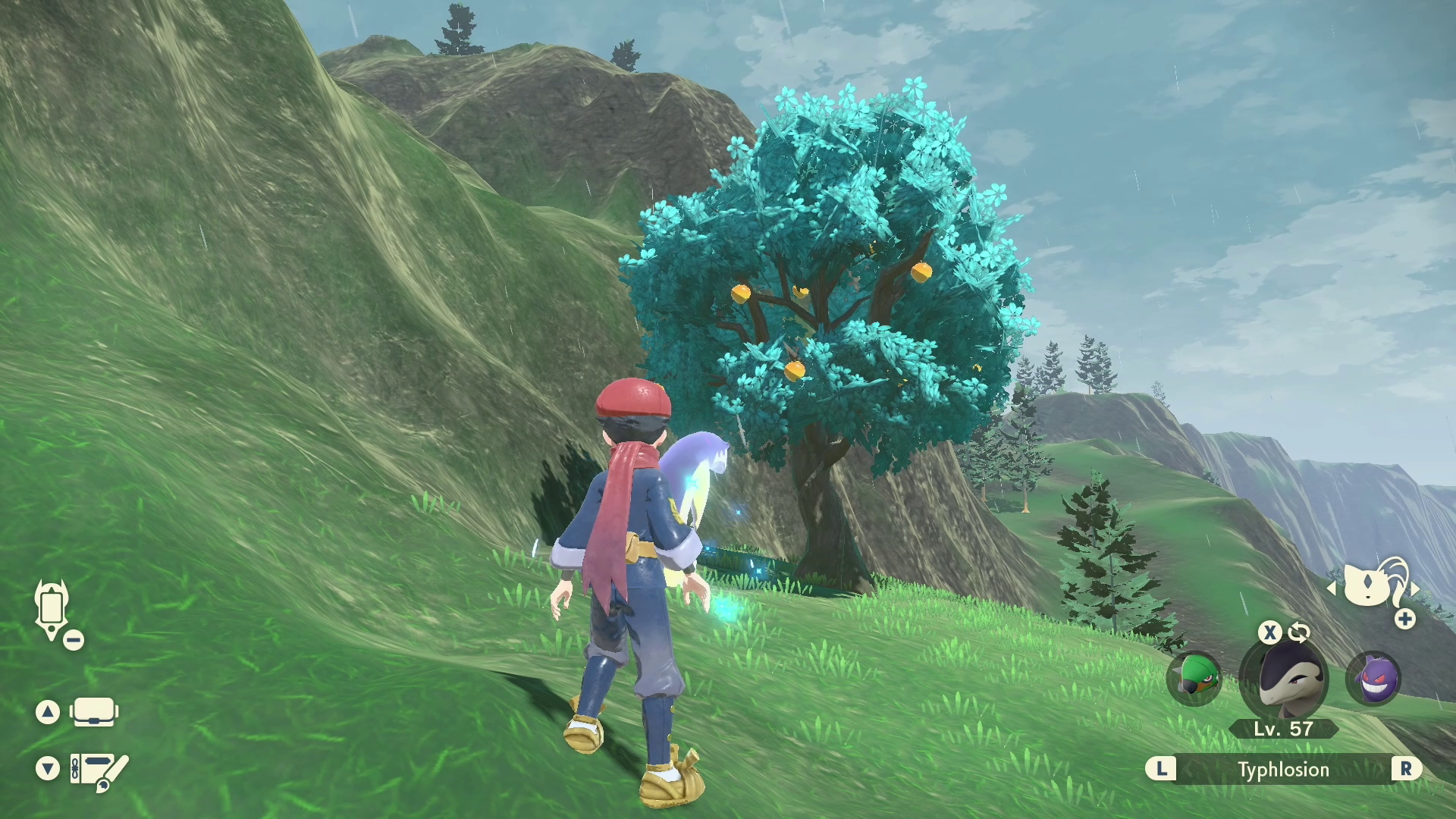 You only need a few of any given item just in case you mess things up and need to try it again. I haven't seen any evidence of Pokémon becoming easier to catch by throwing extra food at it. I believe you only need to throw one.

Sneak Attack the Alpha Alakazam with Food and Smoke

With the food and berries available to you, there are a few more things you'll need to be successful.

For sneak attacks I recommend a Heavy Ball, Leaden Ball, or Ultra Ball, but you might have better luck with other balls as well. I also recommend that you travel with a few Smoke Bombs in case Alakazam gets too far from the grass that you're hiding in. All of these can be easily crafted or obtained.

This brings us to the encounter! 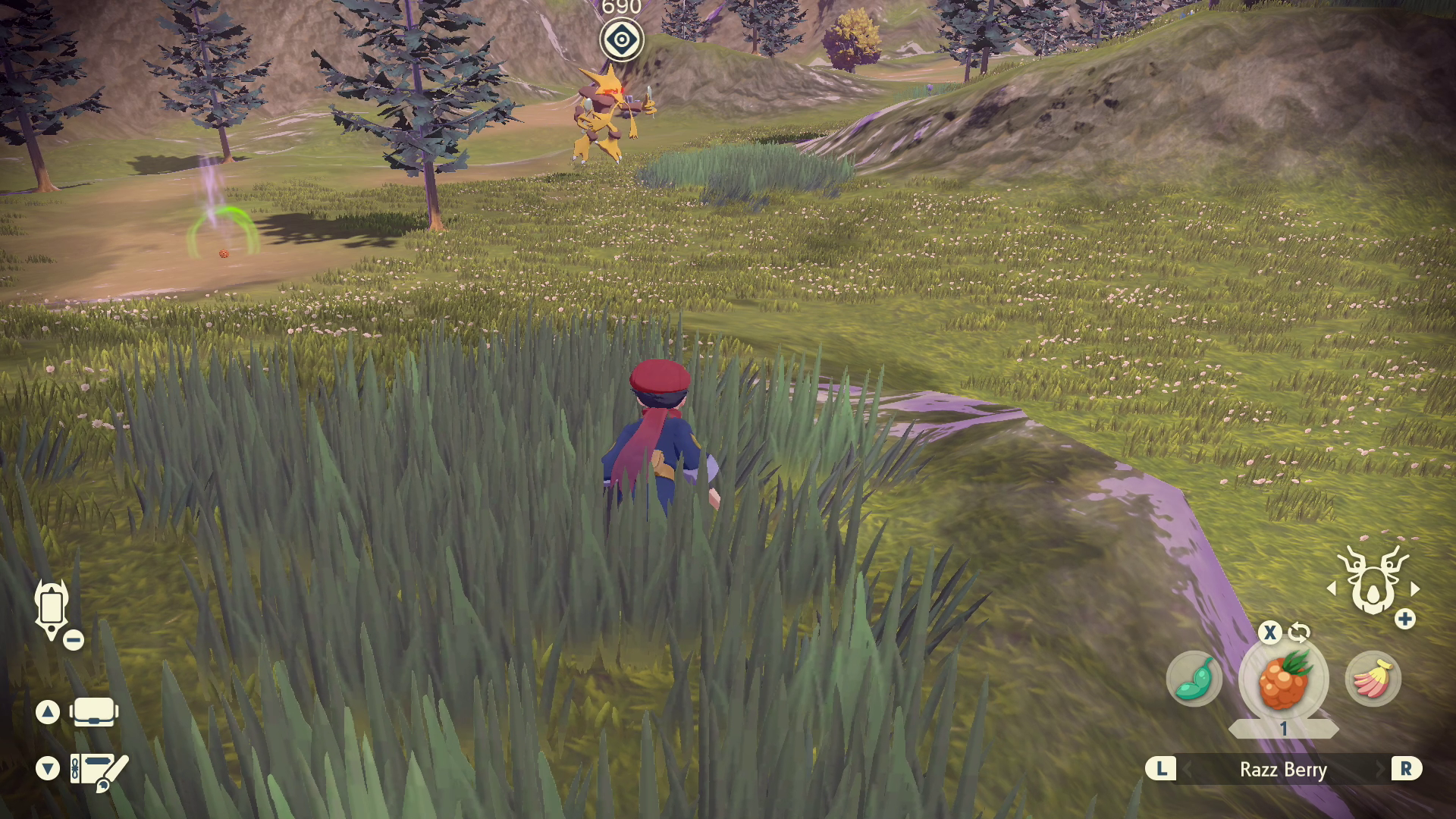 Go to the location I had on my map earlier in the tutorial to find the alpha Alakazam. Make sure you clear out any aggressive Pokémon, otherwise you risk your stealth encounter with Alakazam being interrupted.

Toss one of the preferred food items or the Razz Berry at the Alakazam, preferably so the Alakazam has to turn its back towards you. Once the Alakazam starts eating, throw a Smoke Bomb towards it, but not at it, and then walk into the smoke. At this point you can toss your ball of choice and hope for the best.

If it fails, run away and then try again!

Need help with everything that I mentioned in the tutorial? I recorded a short video of everything that I did to help you out. It can be found below. If the video helped you, make sure you hit the "Like" button and then subscribe to my channel.